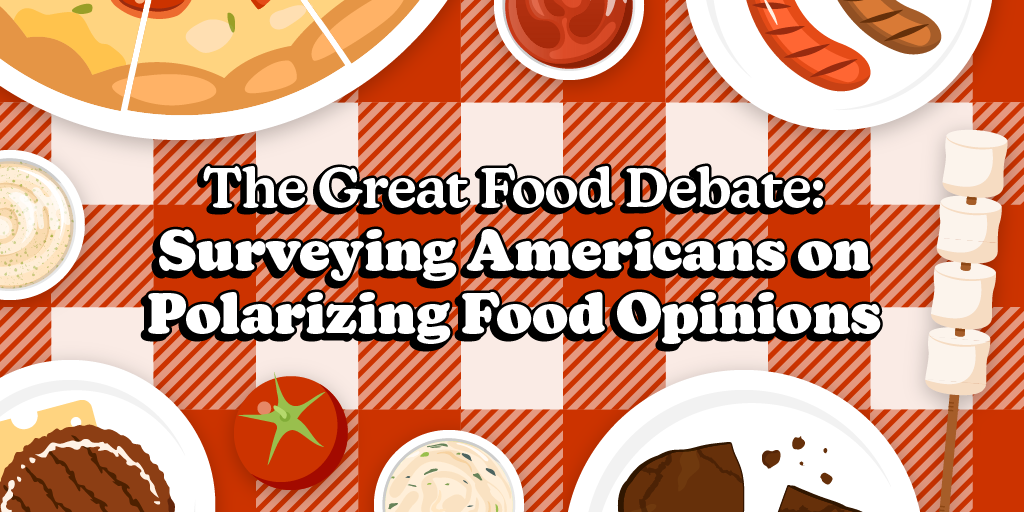 What is it about a barbeque that brings families and friends closer together? Is it the smoky temptation wafting through the air? Yard games with relatives? Engaging conversation with loved ones? Whatever your reason, chances are that food is part of the mortar that bonds you together.

And yet—food can also be divisive. As much as it binds us, it also individualizes us. The way we prepare, dress, categorize, and even pronounce our food can vary widely among cultures, demographics, and even personal tastes. The result is some hilariously polarizing food debates with red-hot opinions firing from all sides.

Are hot dogs sandwiches? Are sandwiches burgers? Should you call it a hot dish or casserole? (sorry Midwesterners, 66% of Americans say it’s casserole.) From the “proper” BBQ cuts to the “correct” way to use condiments, we wanted to drop the gavel on the most sizzling food questions once and for all.

To get to the bottom of this edible boxing match, we went straight to the source: American foodies. In this sizzling survey, we polled 1,000 people across the country asking for their food preferences on everything from weenies and ribs to pizza and dessert. Can’t wait to chow down on our results and see how America’s opinions compare to your own? Read on to find out! 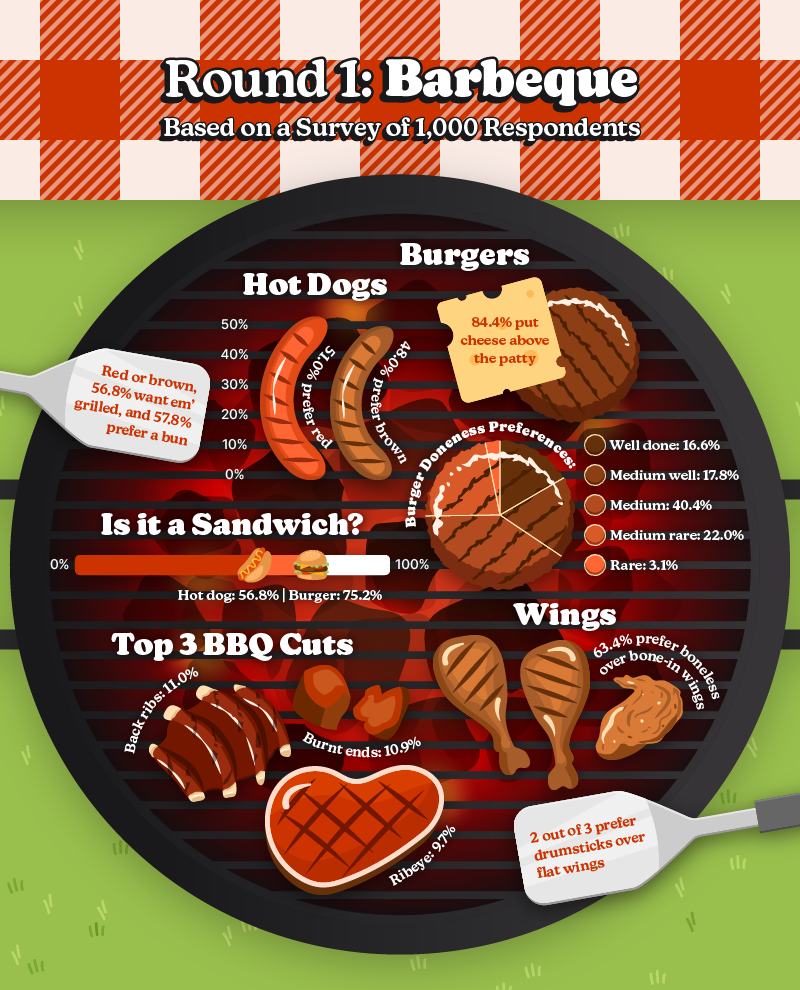 For grill island masters at a backyard get-together, cooking according to varied tastes can be challenging. Party guests are bound to disagree on the most choice cuts, proper burger doneness, and more. But with this blueprint, you’ll be the MVP of your block.

Hot dogs are a must, but disagreement abounds on what type and how to prepare them. If there can only be one kind, stick with red weenies—the favorite among 51% of survey respondents. The obvious preferred cooking method for hot dogs is grilling, but surprisingly 12.6% of respondents lead the misguided belief that microwaved dogs are superior.

The most popular covering for a hot dog is a standard bun, with 57.8% of respondents favoring it. But surprisingly, 1 in 4 would rather use an ordinary slice of bread to blanket their weenies. We suspect there is some overlap with the 17.5% who think boiling hot dogs is the way to go.

Speaking of bread, 57% of respondents say hot dogs are—in fact—sandwiches. Merriam-Webster would agree, defining a sandwich as “two or more slices of bread or a split roll having a filling in between.” But we wager this far-fetched opinion is fleeting with time, since a higher number of baby boomers (63.5%) say so than Gen Z (50%).

Of course, you’ll want more choices than just hot dogs on the grill. Burger doneness is a touchy subject, but medium is the safest bet to achieve on your built-in grill, satisfying 40.4% of respondents. On average, men prefer rarer patties, as more men (43.1%) than women (36.8%) favor medium doneness while more women (23.2%) than men (11.6%) want well-done burgers.

When assembling each sandwich (75.2% say burgers ARE sandwiches), avoid the rookie mistake of putting the cheese below the patty. Lest you forget, 84.4% of party guests will have a bone to pick with you.

What’s more, it seems even poultry lovers can’t agree on what’s best. Don’t wing it when it comes to wings—be prepared with a 2:1 ratio of drumsticks to flat wings. To make things even more delicate for the grillmaster, more than half of respondents (63.4%) chose boneless wings over bone-in wings. Who knew grilling would be such an exercise in math!

If you really want to impress special guests, save a corner of your outdoor kitchen grill kit for back ribs, burnt ends, or ribeye. These were respondents’ top three BBQ cuts, causing 11%, 10.9%, and 9.7% to uncontrollably salivate, respectively. 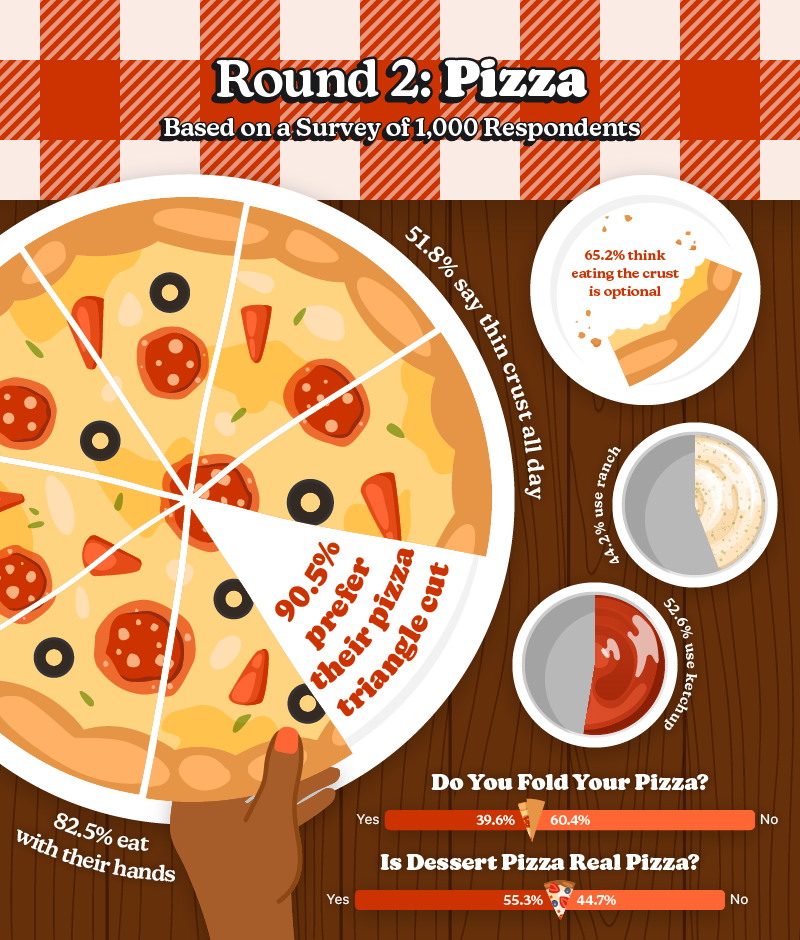 Pizza is one of the most beloved foods in America. Even better when you cook on an outdoor pizza oven. It’s also a topic of fierce debate. From sizzling matters like deep dish and controversial toppings to 53.3% of respondents thinking dessert pizza is “real” pizza (it’s not), it’s a wonder we ever agree on anything at all. So, if you want your guests to use their pie-holes for chewing instead of debating, use this data to inform all your pizza-making decisions.

If Americans CAN agree on one thing, it’s that pizza crust is more than just a vehicle for sauce, cheese, and toppings. It’s one of the most definitive attributes of a pizza and many Americans will die on their hill for their favorite kind. Chicagoans aren’t going to take this lightly, but a doughy deep dish is favored by just 33.7% of respondents while the majority (51.8%) sided with a crispy thin crust. Nearly no one is pining for flatbread pizza with just 14.5% of respondents choosing it.

Even so, 65.2% of respondents believe that leaving uneaten pizza crust on their plate still qualifies as finishing their meal. Honestly, we don’t know how these disgraced pizza eaters sleep at night. Our only hope lies with the older generations, with 46% of baby boomers declaring that if you didn’t eat the crust, you didn’t eat the pizza. We would expect nothing less from a generation that refuses to jeopardize their membership to the “Clean Plate Club.”

With the crust debate settled, we wanted to know how America feels about a few controversial toppings, like pineapple, ranch dressing, and ketchup. We were surprised to find that 47.5% of respondents actually want pineapple on their pizza, meaning just 52.5% of pizzas are safe from certain doom.

Opinions on ranch and ketchup are also too close to call. Whether you’re among the 44.2% who crave ranch’s tangy, acidic flavor to cut the grease on your next bite or the 55.8% of pizza purists who despise the dressing, you can probably give yourself the win on this one. The debate on ketchup swings the other way ever so slightly. 52.6% of respondents say ketchup is a pizza godsend, and the rest are…probably dunking slices into ranch instead.

Overall drizzling, dunking, or dousing pizza with condiments may be one of those newfangled things the kids do these days, because the baby boomer generation is having none of it—only 1 in 4 put ketchup on their pizza and 79.4% scorn the thought of ranch anywhere near it.

Once you’ve sorted out your toppings and dips, the only thing left to do is actually eat. The vast majority want triangle-cut pies (90.5%) and eat with their hands (82.5%). Those who fold their slices are the minority (39.6%). If your eyes were bigger than your stomach, turn to millennials, who are the most likely generation (20.2%) to prefer cold pizza over a hot and fresh slice. 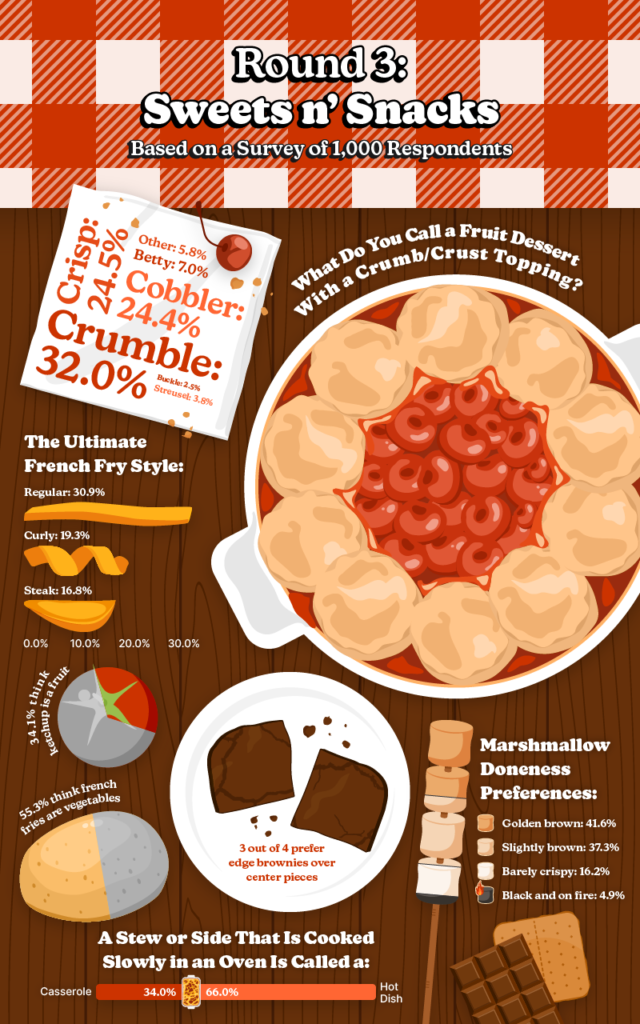 Next we dig into sweets and sides like French fries, a side dish Americans love more than most but can definitely get salty about. Which style of fried potato is America’s one true love and which ones are just summer flings?

According to our results, regular cut fries are an unbeatable classic with 30.9% hearting them. Second and third place go to curly fries (19.3%) and steak fries (16.8%) with other styles like crinkle (4.8%), wedge (6.3%), and shoestring (7.6%) fries getting nothing but breakup texts from respondents.

Shockingly, more than half of our respondents consider french fries to be vegetables! Breaking this down further, only 48.2% of women are in french fry denial while 65.5% of men are. We’ll chalk this one up to wishful thinking.

Luckily ketchup, an obvious sidekick for fries, is where the majority of Americans draw the line—66.9% say ketchup is not a fruit. Still, though, the classic condiment suffers from some level of nutritional sacrilege. Once again, more men (38.7%) are willing to take this leap of logic than women (27.7%), claiming that the tomato content in ketchup earns the sugary, processed dip its seat among fruit.

A closer relative to fruit than ketchup is crumble, a fruity delight with a crumb and crust topping. That’s right, 32% of respondents call it a crumble—voting out crisp, cobbler, betty, streusel, and buckler as improper names for the bake.

Desserts may be sweet, but foodies don’t sugarcoat their opinions on what’s right or wrong when it comes to their favorite confections. Brownies are sure to bewitch your guests, yet not all pieces are created equal. Three in four prefer crispy edge brownies while 24% want gooey center ones. We can’t say we understand America on this one, considering the gobs of gritty frosting that often accompany those chewy edge pieces.

Additionally, grillmasters and fire stokers should know that the definitive way to cook a marshmallow is golden brown, according to 41.6% of respondents. On the flip side, charred and flaming ‘mallows will crash and burn at your next gathering, tantalizing less than 5% of Americans 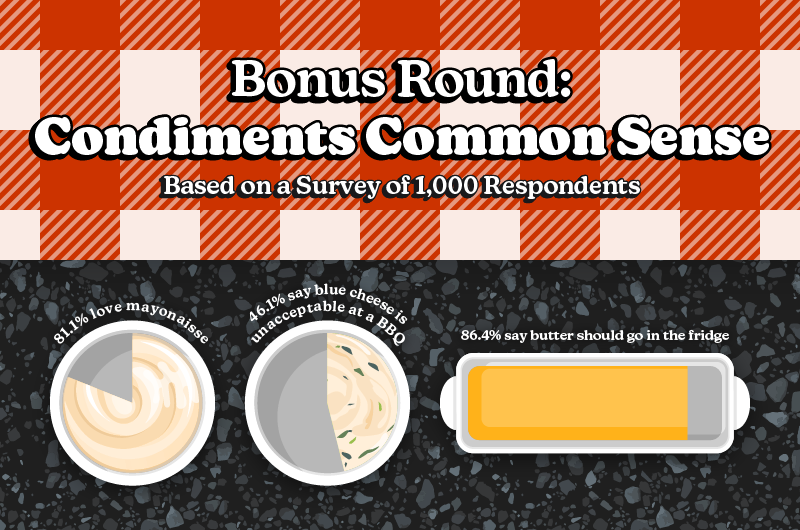 As one final joust between food opinions, we asked survey takers to lay it all on the table when it comes to condiments. Respondents stood staunchly behind mayo—America’s top-selling condiment—with 81% declaring love for the versatile spread. From burgers to hot dogs to french fries, it’s hard to run out of ways to use mayo at your next BBQ.

Anything with blue cheese is a riskier inclusion in your picnic smorgasbord. Only 52% of guests would find this moldy snack acceptable at an event they’re attending. Then there’s butter. While some prefer it soft and spreadable, they are in the minority without a doubt. More than 86% expressed strong feelings that butter belongs in the fridge.

We thoroughly enjoyed uncovering the definitive opinions on many popular food debates, and we learned a lot along the way. We now know that square pizza is essentially criminal, most Americans have a thing for edge brownies, and blue cheese is hit-or-miss.

But above all, we know that food is imbued with the power to connect friends, family, and neighbors in joint experiences that we’ve been craving over the past year. At RTA Outdoor Living, we provide built-in grills, outdoor appliances, outdoor kitchen design, and more to help families to associate good food with the company they hold dear… While cooking on that sweet flat top grill. Hope to see you at the next block party! 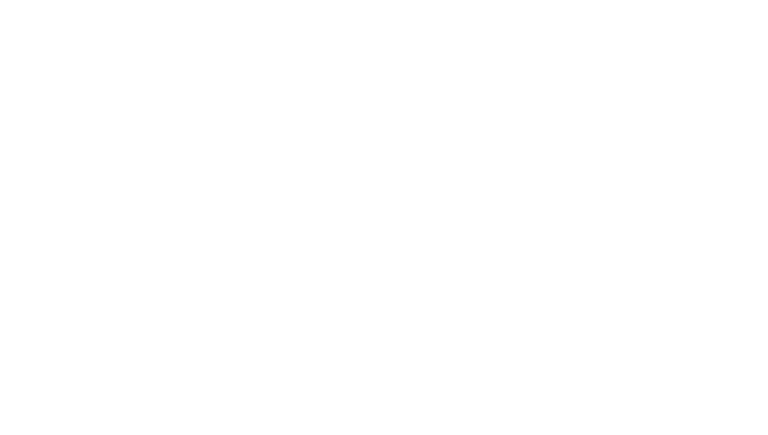 Enter your contact information below and one of our expert outdoor kitchen designers will reach out to you soon to schedule a call at your earliest convenience.

My cart
Your cart is empty.